Published in The Tico Times on December 19th, 2015

IQUITOS, Peru — We have to get our entrance stamp for Peru before the office closes at 5 p.m. The cargo boat is scheduled to leave for Iquitos at around 8 p.m., so we have some time to kill in the little port of Santa Rosa. It’s basically a row of wooden shacks with corrugated iron roofs by the Amazon River.

Workers load kilos and kilos of fish into a container with ice. It must be hard work for them under the blazing sun and in this Amazonian heat and humidity. Their shirts are soaked with sweat.

We sit down for a beer and watch the sky above the jungle turn purple and red. Smoke rises from the houses between the hazy jungle growth, and when the sun sets we see lights switch on, on the Colombian side of the river in Leticia. This is the point in the Amazon jungle where the three countries Brazil, Colombia and Peru come together. From here, you can go by boat to the east, into Brazil towards Manaus, or like us, you can move against the current into Peru, to Iquitos. 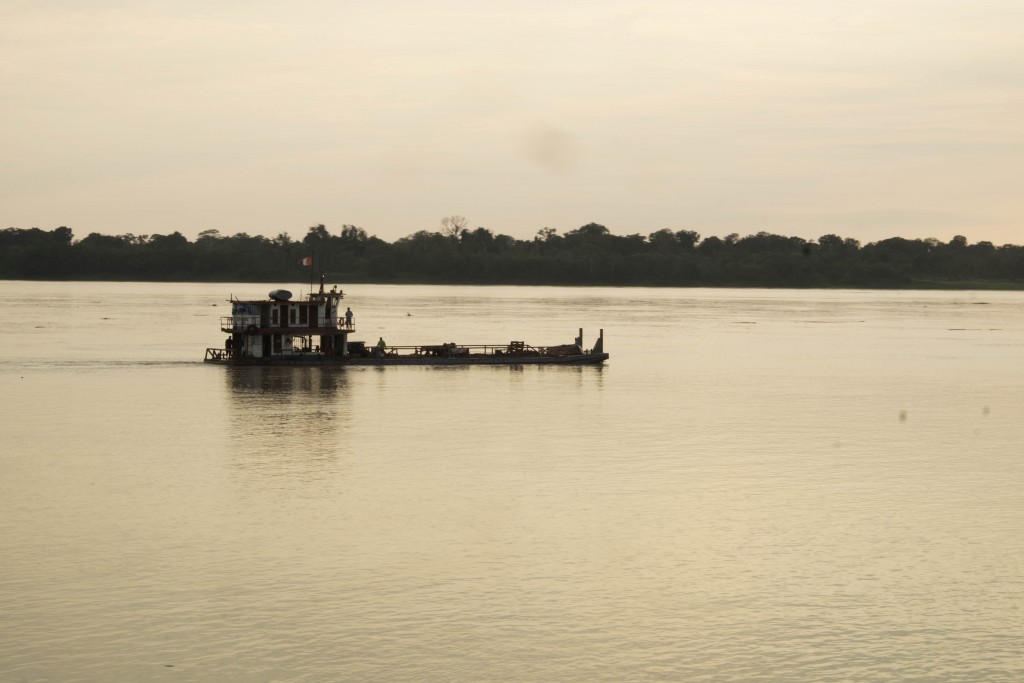 Iquitos is one of those places we have wanted to see for years. It’s an outpost of civilization: Almost 400,000 people living in the biggest city in the world that’s not connected to anything else by road. This means you can only get there by boat or small airplane.

After sunset, when our cargo boat heads off, we hang our hammocks from the metal rails on the upper deck, which is basically built on top of the roof. The boat is divided into three parts: The first deck is for cargo – from freezers to scooters and piles of bananas; The middle deck is overcrowded with dozens of locals of all ages; And the upper deck is just me, my travel partner, a blaring television and three Peruvian men. As you have to take the stairs to get to the bathrooms, most people don’t want to be up here. 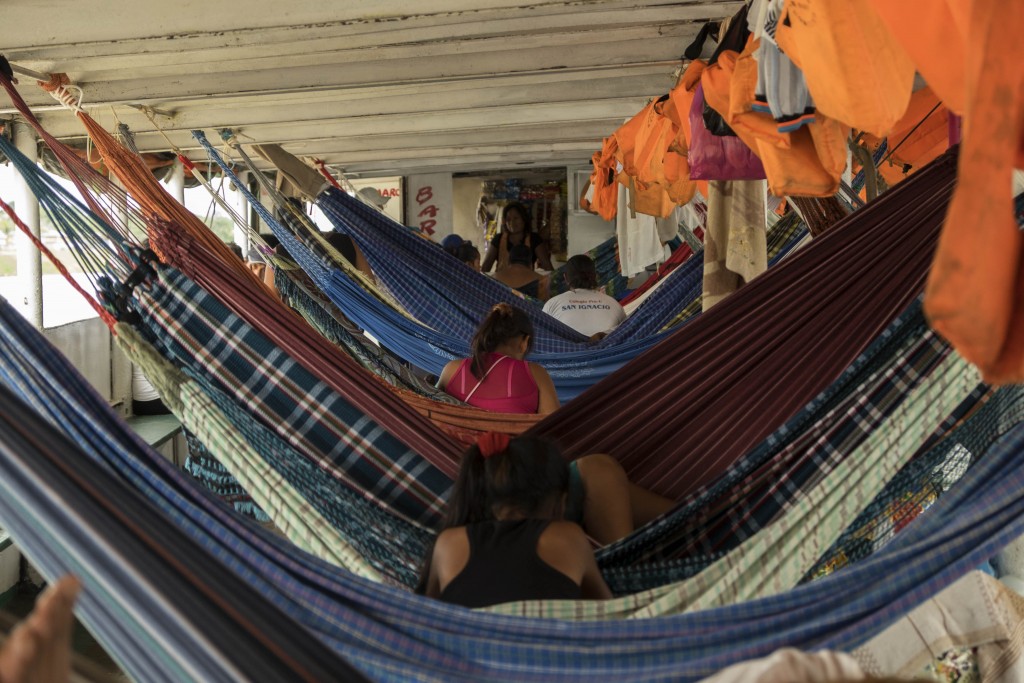 One of the Peruvian men, in his 50s with a thick mustache, introduces himself as Gustavo Palomino Boza. We chat a bit while the boat finds its way out into the river. It turns out Gustavo just broke up with his girlfriend and decided to move to Leticia, to start life over again – according to him it’s easier to find work in Leticia as it is not as full of restaurants as Iquitos, yet. He’s headed back to Iquitos now to get his stuff.

I lie down in my colorful hammock, which a wrinkled lady in a little roadside shop in Leticia sold me for a few dollars, and watch the dark trees along the riverbank. The sound of the motor rattles, but the view of the jungle, which is softly lit by moonlight, is mesmerizing.

The boat stays close to the bank, as the current is less strong there. A worker from the boat comes by to collect the 80 soles ($25) for the three-day boat ride, which includes food. For awhile the television has a signal, and everyone is glued to the image of an Evangelical priest giving a sermon. But earlier than we expected every sound on the boat, except for the engine, dies down, and people lie silently in their hammocks. Jungle life means early sleeping, early waking. 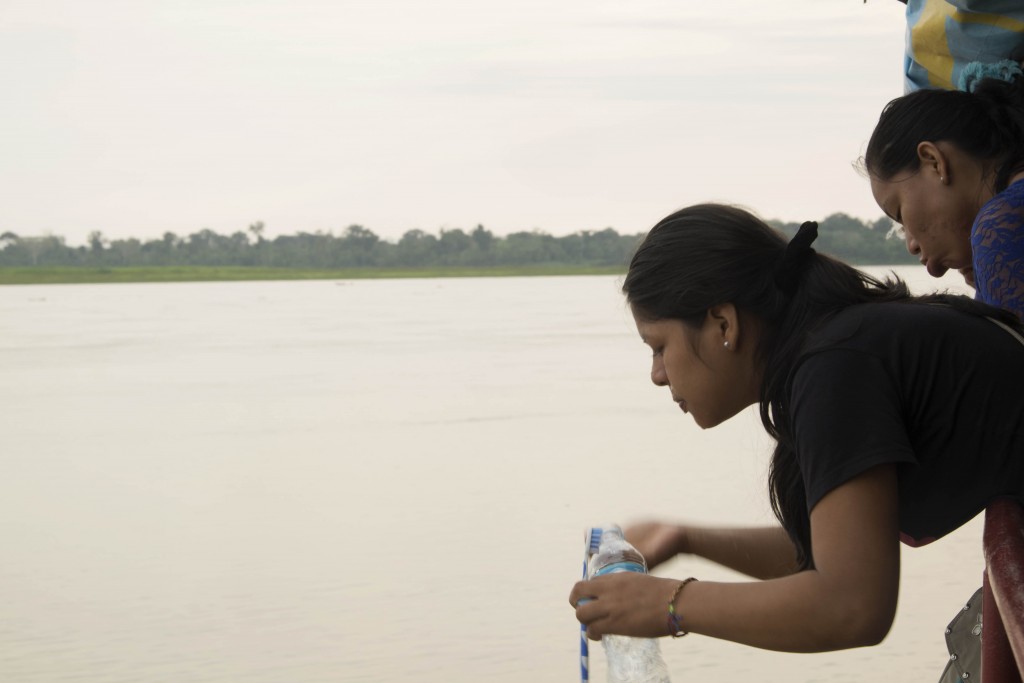 “Sometimes the narcos use a boat like this one,” Gustavo, the friendly Peruvian man, tells us the next morning. We are leaning on the railing in the early morning, observing the little village where we just stopped to let some people get off the boat. Apparently Gustavo saw some suspicious packages unloaded during the night, which he thinks may have been cocaine. The only thing I had seen during the night, when I awoke a bit shivering from the cold wind blowing over the boat, was an old man taking a leak in the corner of the deck. That’s the way you avoid having to take the stairs to the mid deck for the toilets.

“Sometimes they are on a little boat,” he says, launching into a lecture on the local trafficking business. “This is basically lawless territory. I would use a submarine if I were them, like they do in Central America. It would save a lot of hassle and dodgy middle-of-the-night transactions.”

The waiter, a transvestite boy with an attitude, brings our breakfast: sweet porridge in a cup and two rings of dry bread. The trip on the cargo boat isn’t what you would call a gastronomic experience. Lunch consists of rice, a few vegetables and half a chicken wing; Dinner is a watery chicken soup. But, along the way the boat stops at many little villages, where the locals are keen to earn some income by selling fresh fish with cassava to the hungry travelers for a dollar a plate. 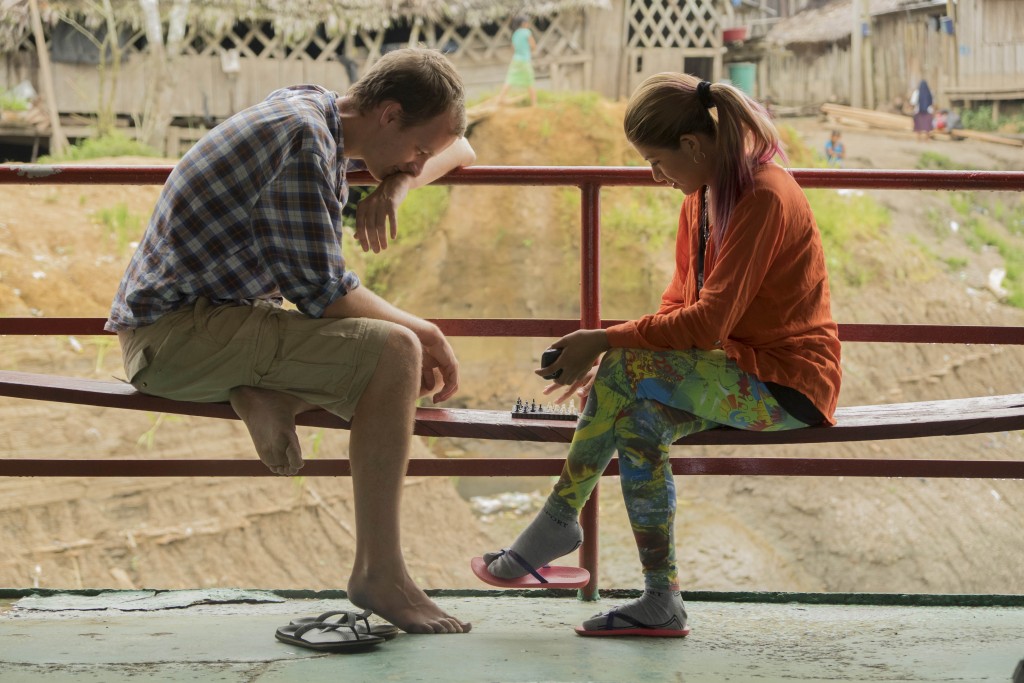 Author playing chess with a passenger

The first part of the journey, from Leticia to a small jungle city called Caballococha, is where the Amazon divides Colombia and Peru. It’s an area famous for drug trafficking, just like the Putumayo River some 130 kilometers to the north. In 2012, Peru became the biggest coca producing country in the world — surpassing even Colombia — and somehow all this production has to find its way through the Amazon to the consumer markets in the U.S. and Europe.

After breakfast we stop at Caballococha, where a group of teenagers climb up to our upper deck and hang their hammocks. They could have easily been from Lima, with their fancy clothes and smart phones, taking selfies as they install themselves near the electrical outlet to be sure they can charge their devices during the trip.

But they weren’t from Lima; They’re the nouveau riche of the jungle. Caballococha has become a big coca producing area since a genetically modified version of the coca plant emerged that can resist the humidity and heat of the lower jungle. Coca production in the area means more money around for kids like these to buy smartphones and fancy clothing. 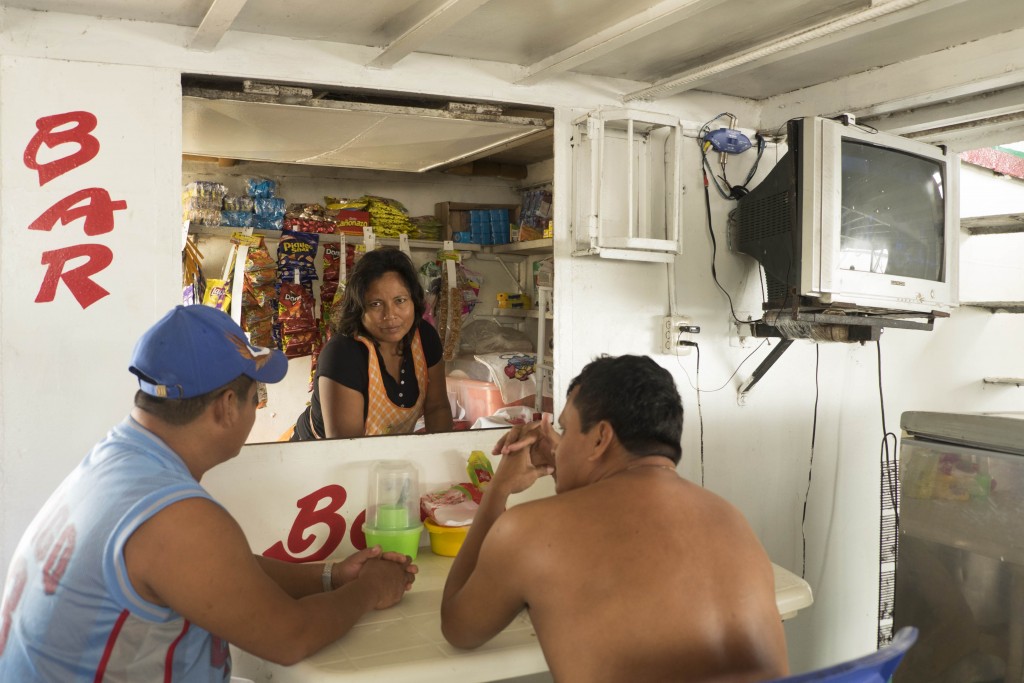 It’s amazing how many villages, how much human activity we pass during a day. I always imagined the Amazon as a vast tract of jungle devoid of human civilization, where anacondas hang dangling from trees, monkeys jump all over each other and play and jaguars drink from the river at clearings in the forest. Instead, we see village after village of wood and corrugated iron, people in motorized canoes moving along the river, and piles of plastic waste on the river banks. In between these villages, you only see the trees. It’s a phenomenon called the ‘silent jungle’ in conservation circles: The wildlife has run away from human encroachment, leaving only silence behind.

Still, with some 1,500 different bird species in the Amazon, which is more than Europe and the U.S. combined, there are opportunities to spot them all day: Predators circling high up in the air; Herons on the waterside. As we pass the next little village, we see the famous pink dolphin gliding through the water. They are curious creatures, attracted to the sound of the motor. They come a bit closer to see who we are. The Amazon is home to two different species of river dolphins: grey and pink, the latter of which can grow to up to three meters long. They like to hang around at the convergence zones, where side rivers connect to the Amazon, a good place for hunting disoriented fish.

We hang over the railing to catch a glimpse of their pink skin as they lift their heads above water to breathe. Their curiosity can be dangerous for these creatures: Some fishermen hunt them to use their meat as bait for the carnivorous Mota fish. This is mostly done in Brazil but slowly starting to happen in Peru, also. The dolphin are safe with us today, though. 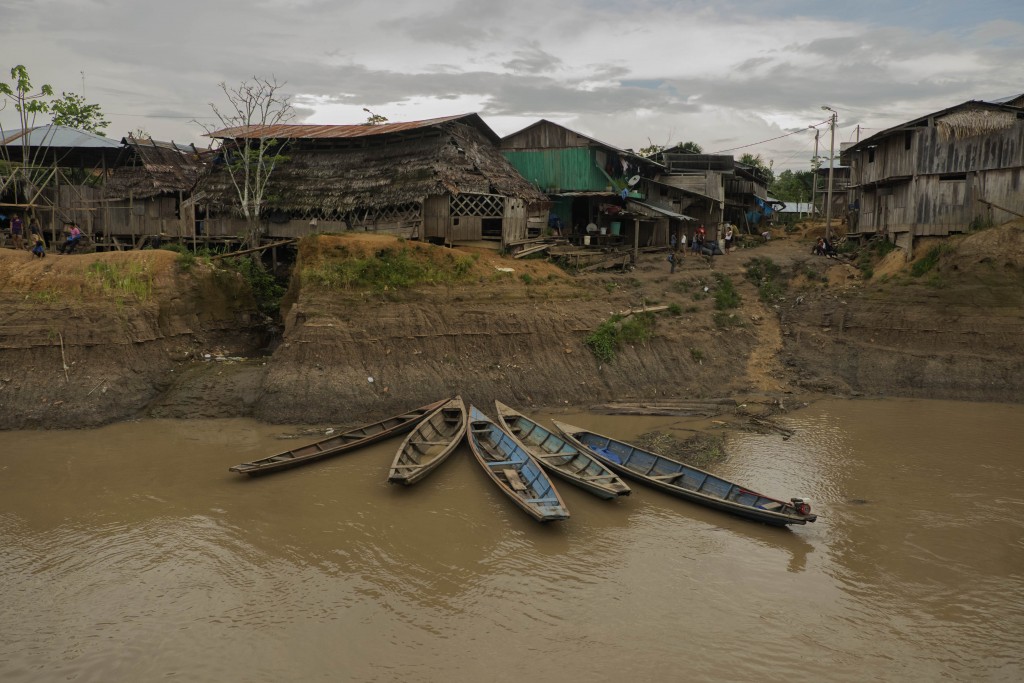 A village along the Amazon River

After two days on the boat we start to get into a certain rhythm of lying in our hammocks, chatting with people and playing chess. We watch the loading during stops at little villages, where the workers pull the chains of the crane, their shirts soaked in sweat.

And at certain moments, the rain pours down in such enormous quantities it feels like you might as well be in the submarine Gustavo was talking about. The sound of millions of drops drumming the roof of the boat and flaps on the side has a soothing effect.

One afternoon, just after we pull away from one of the villages, everyone gets excited. A Brazilian girl, with whom I played some chess earlier that day, had left the boat to take a look around the village. She hadn’t returned in time. We go to the deck to see if she is on the pier, and right at that moment we can see her running to the docks. Some of the Peruvians try to persuade the captain, a chubby old man, to turn around, but he won’t hear of it. 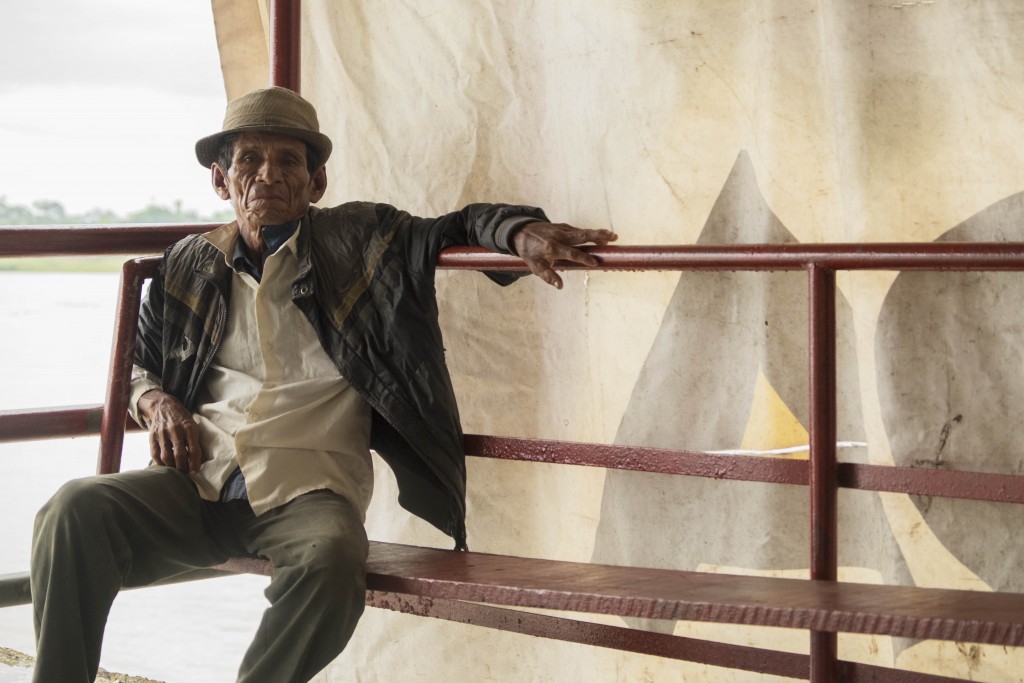 We can see the girl jump into one of the motorized canoes and chase us. We have to slow down to turn back into the Amazon from the little tributary we’re in, so the girl manages to catch up with us and climb back on the boat. People on the boat are more aware of their fellow passengers than it had seemed.

Guidebooks and bloggers warned us of people stealing luggage on the boat, but after two days we have the feeling we can basically leave our stuff behind when we go to the middle deck for a coffee. But maybe it’s because we have Gustavo and the others around us, who we have befriended and who take care of our stuff like we take of theirs when they need to leave.

On the last morning, as we get closer to Iquitos, we see more and more boats pass by on the river. Some are speedboats moving back and forth to jungle resorts. They can cover the same distance we did in 14 hours — saving time but taking a toll on passengers’ backs with the constant bouncing over the waves. The first glimpses of the city are chimneys atop the only factory there. It’s the electricity company that provides Iquitos with power for their lights and television sets.

As we enter the dirty and industrialized port of Iquitos, we see the large stacks of wood, trunks and sawdust. There are cargo boats loaded full of trees. It’s the big war of the Amazon: organizations and environmentally-minded locals try to conserve the last bits of rainforest, while other locals cut down trees for a few bucks and corrupt local governments ensure the big shipments make it out of the jungle. According to a report from Global Witness, between 2002 and 2014 some 57 environmental activists were killed in the humid Peruvian jungle — mostly over land rights, mining and illegal logging.

The harbor of Iquitos is a mess of people running over the muddy roads, cargo ships being offloaded, and little boats passing by with their noisy homemade engines. After we say goodbye to our friends from the boat, we jump onto a mototaxi that takes us to our hostel. As we ride into the noisy city of Iquitos, where hundreds of mototaxis rule the road, we would almost forget this is still a city in the middle of the jungle.

It seems we are back in civilization.